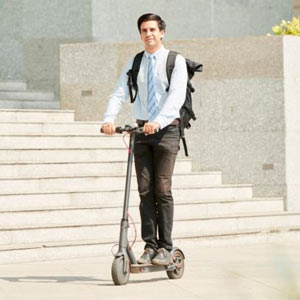 I remember the good old days when you pushed your scooter through the neighborhood. No electric engines, no motors, no LED displays, it was just your scooter and your stamina.

Looking at scooters these days I can’t help but wonder how far they have come. From simple pushing mechanics to smartphone-controlled cruise modes, electric scooters have evolved a lot and this article aims to focus on some of the best off-road electric scooters that are available in the market. Let’s take a look at some of the beasts that dominate the off-road “scooter sports”. 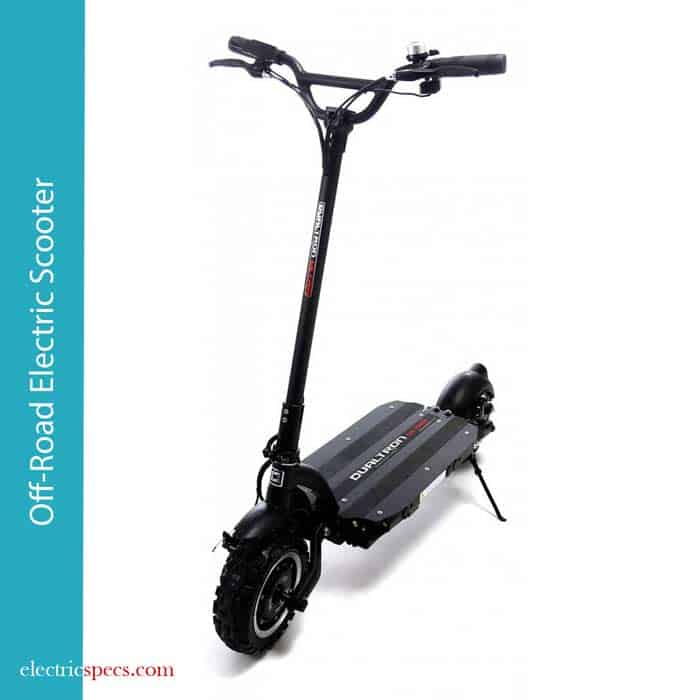 Each Dualtron model comes with the following features and the Ultra V2 is no exception.

What we liked about Dualtron Ultra V2 electric scooter

What we didn't like about Dualtron Ultra V2 electric scooter

The S4 is the most powerful electric scooter in Nanrobot’s roster. Thought the specs are slightly inferior to the Ultra V2, the RS4 is a bit cheaper and is a great option for those who are entering the realm of off-road sports.
The scooter comes with a dual motor setup, dishing out a total of 3200W of juice in extreme situations. It has a highest speed of 45miles/hour and is capable of climbing hills as steep as 65 degrees.

We were a bit skeptic of elevation, so we gave it a shot. The scooter performed well on full charge but struggled on rocky terrain.
The off-road mileage is 55 miles but it can bow down to 30 on rocky and unforgiving roads.
However, I had a complaint about charger quality. For an off-road electric scooter, the charger is quite flimsy. It appears to not have received a lot of attention and is very poorly made.

The RS4 is a great choice for casual the commuter. It’s fast, sturdy, and is recommended to anyone who’s looking to get a whiff of off-road adventures. 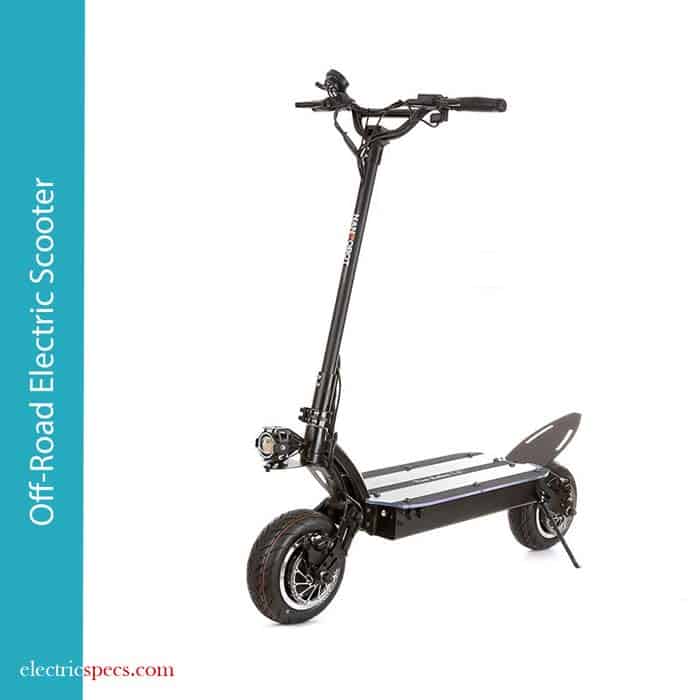 What we liked about Nanrobot RS4 electric scooter

What we didn't like about Nanrobot RS4 electric scooter

The Razor RX200 is one of the most popular electric scooters available in the market. Thanks to its simplicity, it is recommended choice for everyone, including kids.

We have certainly had our fun with this bad boy. Off-road adventures have become a regular thing for electric scooters, and the RX200 manages to handle that stuff with ease. The greatest selling point of the RX200 is the ramped-up torque which provides the extra force to navigate those tricky stone laden bends.

Coupled with the 60psi tires, the electric scooter provides a balanced combination of control and speed(of up to 12mph).

The two 12V lead-acid batteries also dish out a generous runtime of 40 minutes(varies slightly with terrain), but make sure to charge the scooter before setting off to ensure the best possible mileage.

The RX200 gets a solid 10/10 in terms of build quality and reliability. However it’s not the fastest or the long-lasting kid on the block, and given the price you shouldn’t expect as much. 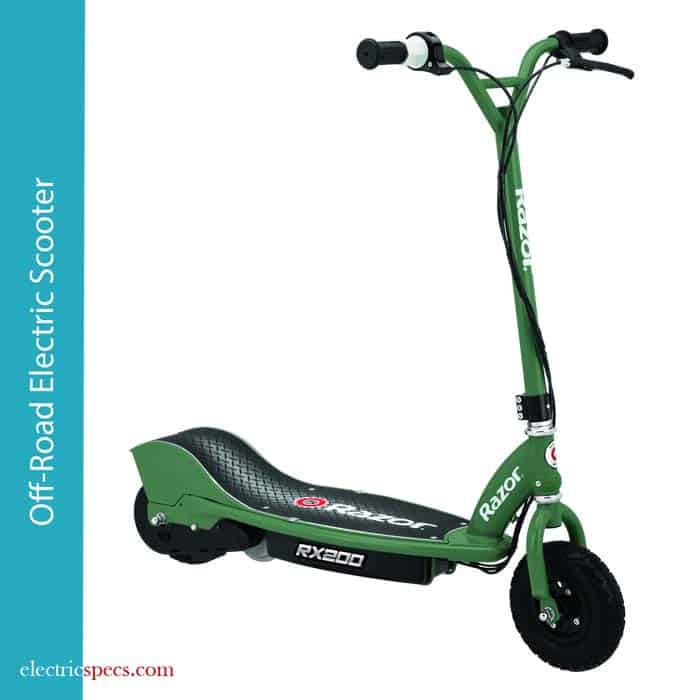 What we liked about Razor RX200 electric scooter

What we didn't like about Razor RX200 electric scooter

Oh, how the mighty have fallen! The Super Turbo 1000W ruled the off-road electric scooter industry once. It used to be one of the go-to options for off-road adventures. Though there are better options available, the Turbo is still is a great option if you’re looking for a small powerhouse.

Right from the get-go, the scooter is powered by a 1000W motor, which can reach the highest speed of 26 miles/hour, which is impressive compared to some of the contemporary electric scooters.

The chain-driven motor is also pretty outdated and creates a lot of noise. Hence it’s not used anymore.

The scooter is powered by 3 12V/12Ah lead-acid batteries, dishing out a total travel distance of 18 miles on a single charge.

Though the model is a bit outdated, compared to the price, it can compete quite effectively with some of the other beasts on the list.

Finally, it has load capacity of 250lbs and a power-saving mode for long commutes.

The Turbo 1000W is a perfect choice if you want to buy a premium quality ride on a non-premium budget. 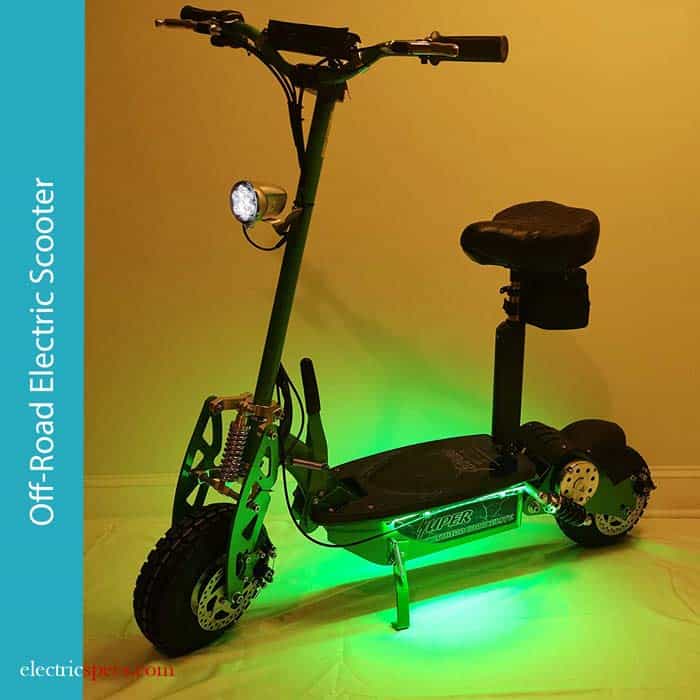 What we liked about Super Turbo 1000W electric scooter

What we didn't like about Super Turbo 1000W electric scooter

It wouldn’t be an understatement to say that the Wolf Warrior 11 was indeed meant for warriors.

The Wolf is as close to a mountain bike as Avatar to the best 3D movie ever created.

The monstrous abomination appears to be a hulk of a scooter accelerating from 0 to 15mph in about 1.9 seconds. Just to get things into perspective, only one or two other electric scooters are able to dish such performance in the world.

Kaabo, the manufacturer of the scooter claims that it can travel a whopping 62 miles on a single charge. However, during testing, we’ve found that most scooters can deliver only 70% of the claimed range, which is 44 miles in Wolf’s case. However that’s the longest range we have gotten on any electric scooter so far, and we have tested a lot of scooters.  Interesting fact, the controller, motors and EYE3 display are taken from MiniMotors  Dualtron Thunder.

Performance-wise, the Wolf is a beast. Even during long commutes we faced no discomfort whatsoever, so that’s a pass on terms of comfort. However, it’s not portable and possibly won’t fit in the trunks of small cars when its folded down. 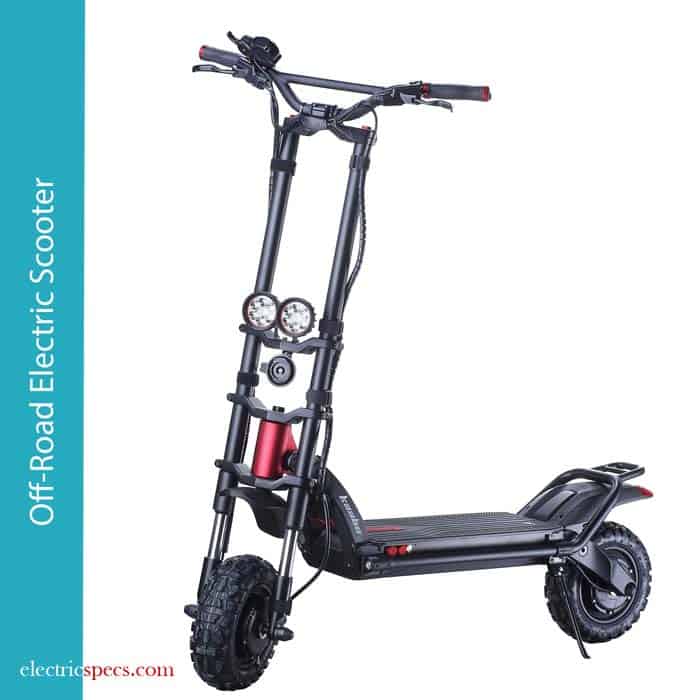 What we liked about Wolf Warrior 11 electric scooter

What we didn't like about Wolf Warrior 11 electric scooter

The UberScoot 1600W is like the Terminator version of scooters. The bare minimalistic design is definitely an eye-grabber and doesn’t compromise the durability at the least.

During our test, we found the UberScoot to be one of the most stable and heavy-duty electric scooters in the market.

One thing that sticks out is the ample legroom. It is done on purpose to accommodate two riders at the same time and affects very little on phenomenal performance of the scooter. However, the maximum weight limit is still 256lbs.

The relatively short charge time makes it a viable choice for many scooter enthusiasts out there. The 1600W 48V motor delivers a total mileage of 12 miles which may seem quite less, but given the price tag, you can’t complain. Especially when the competitors are nowhere near UberScoot’s mileage.

It fits in nicely in the trunk of your car and weighs at only 89 pounds. However, we don’t recommend the UberScoot for off-road journeys. Slight elevations won’t be a problem for the electric scooter, but unforgiving roads filled with stones and bumps will slightly affect the mileage, more so if you have a passenger in the back. 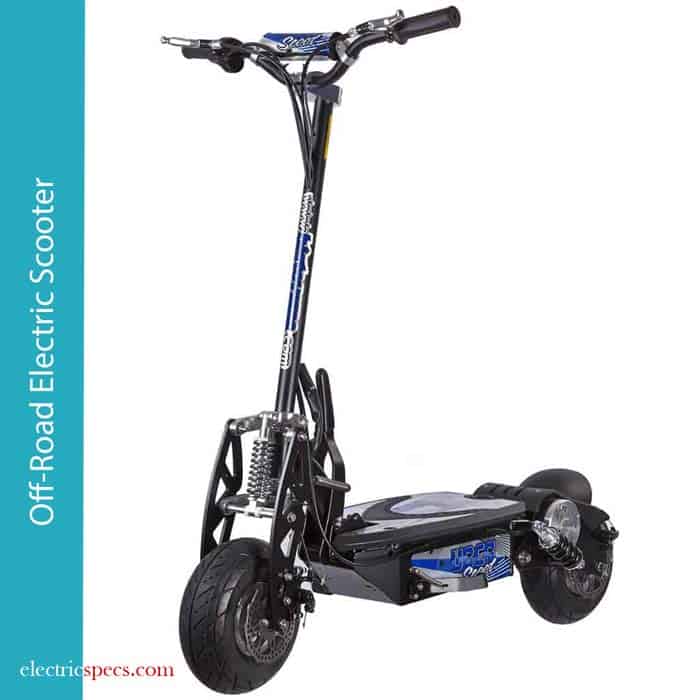 What we liked about UberScoot 1600W electric scooter

What we didn't like about UberScoot 1600W electric scooter

The QIEWA QPOWER is the new kid on the block. We were a bit skeptic to try it out but a few users reported a rather remarkable experience, so we gave it a shot. It certainly exceeded our expectations.

The spec list is impressive and after testing it you for a while we highly recommend it if you want a low budget and robust scooter that also supports two riders.

The QPOWER has a top speed of 52mph which is surprising. Other electric scooters at this range offer less than half its top speed.

The QPOWER runs 2 x 1600W motors, powered by a 26Ah. The total mileage on the scooter is about 50 miles which is great. However, it depends on terrain and on the load(maximum loading capacity 273 pounds).

City travels aren’t a problem and QPOWER even does short work of-road obstacles as well.

The final verdict, although it’s a relatively new brand, it met our expectations and earned our recommendation the hard way. 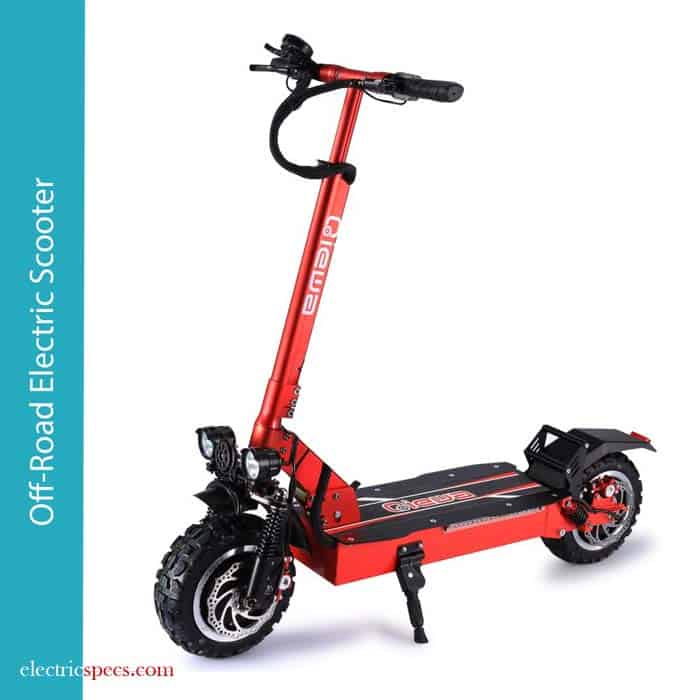 What we liked about QIEWA QPOWER electric scooter

What we didn't like about QIEWA QPOWER electric scooter

Electric scooters have been with us for a while now. They have redefined the way people travel to work, school parks and so on. The off-road scooters are a rather fresh concept and one that attracted quite a lot of attention.

There is a significant gap between normal electric scooters both from a spec and price point of view. Off-road scooters can be expensive and is an investment that requires due consideration of certain aspects.

This buying guide aims to highlight the points you must focus on while choosing an off-road electric scooter. Usually they are all similar with minor variations and upgrades. A wide variety of scooters makes it extremely difficult to choose from, so here are a few things you must consider when choosing your adrenaline boosters.

The one thing that separates normal scooters from off-road electric scooter is the motor. Some are chain driven while others have a fan mechanic to propel the rides.

The ideal power rating for an off-road electric scooter should be in the vicinity of 2400-5400W. The Wolf Warrior 11 is a shining example of a powerhouse scooter.

The scooters themselves are quite heavy so they require all that juice to navigate effortlessly. Anything less, and you might have difficulty riding through rough terrains.

The UberScoot 1600 is a decent buy. It’s cheap and can afford some lightweight off-road commutes. But if you’re serious sports, the starting mark for decent off-road electric scooter start from 2,200-2,400 dollars.

Ah, the Speed! This is yet another aspect where the numbers are all over the place. While choosing a scooter you might want to do a bit of research on the terrain you wish to ride the vehicle.

Usually, off-road scooters boast a speed of 26mph to 55mph depending upon the motor you’re running under the hood.

It’s a bit of personal preference, so pick one you’re most comfortable with and upgrade to a higher model once you’ve gotten the hang of it.

We would recommend the Super Turbo 1000 for starters and the Wolf or the QIEWA QPOWER for veteran riders.

Mileage is also a matter of personal preference. It depends on two factors, the motor, and the battery.

If you’re keen on long journeys then anything from the Dualtron V2 to the Wolf is a great choice. You can switch to the single-engine mode to get the maximum mileage out of the scooters. However, racing your friends on rough and bumpy terrain will affect your travel distance.

It comes down to your preference really. It doesn’t matter one you choose they are all quite efficient either way.

Kudos to you if you have reached the bottom of the guide. Choosing an electric scooter is no different from choosing a car. The ones that I have mentioned on the list aren’t the only off-road electric scooters out there.

However, in my personal experience, I have found them to be extremely efficient at what they do.  Whatever the reason you buy an off-road electric scooter, wether is for offroad adventures, for hunting or just for fun, if you’re looking for something more robust that doesn’t cave in at the first sight of stress, I have also included a few budget ones that are not so suited for long off-road travels.

This is a simple guide. Feel free to compare your own notes with mine and see which one suits your fancy. Happy Riding!

Wow, cool article! Keep it up.

Electricspecs.com is a participant in the Amazon Services LLC Associates Program, an affiliate advertising program designed to provide a means for sites to earn advertising fees by advertising and linking to Amazon.com.
Electricspecs.com also participates in affiliate programs with Clickbank, ShareASale, or other sites and is, or may be compensated for referring traffic and business to these companies.
For more informations please read our affiliate disclosure here.